Ernest Jolly’s work involves the re-contextualization of lived experience, of both the individual and the group, in comparison to environmental change in nature. Through sculptural forms and video/sound installation I’m pulling together these lived experiences into a hybridized practice. My most recent body of work explores the architectural entropy of failing urban environments in relation to stresses on nature such as erosion of coastal lands and the depopulation of honeybee hives. The works compares and contrast such natural phenomenon as Colony Collapse Disorder to the decline of the industrial city. The cities I’m most interested in are former auto and steel manufacturing towns in the mid-west. These cities whose economies have rest largely on heavy industry production have, within the past decade, experienced huge economic and population decline. This decline has left many cities abandoned, without a sustainable infrastructure and deteriorating architecture. Colony Collapse Disorder is a phenomenon in which worker bees from a beehive abruptly disappear. There is no definitive answer for this disorder at this time. Some attribute the problem to biotic factors, environmental stress, and malnutrition. Others suggest that it’s not one single factor but many factors that are the cause. My work is both a meditation and a call to action in addressing the factors of urban industrial decline and disappearance of species in nature. 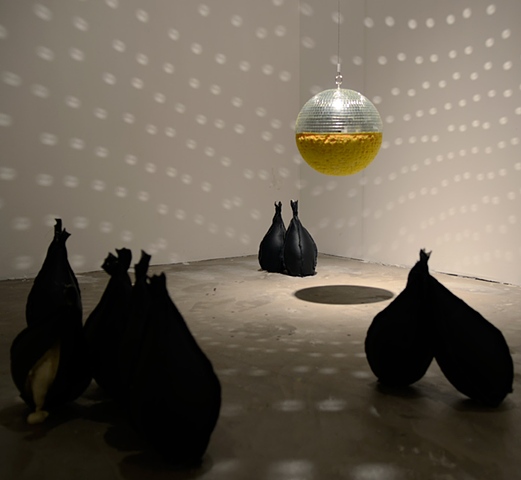